A woman who was being sought over claims of swindling a man from Laos of Sh300 million in fake gold scam has finally been charged.

Pauline Adhiambo Idol alias Rose Omamo has been on the run since May 2019. She is facing charges together with Jared Otieno of obtaining the millions from Sounthorn Chanthavong, a director of Simoung Group Company.

She has been masquerading as a relative to senior government official. She is accused of obtaining the money on diverse dates between February 8 and February 25, 2019 in Nairobi county jointly with others who have already been charged.

In another count, the accused persons are charged that on May 13, 2019 at Kaputei Gardens plot number 12 in Kileleshwa, they were found to be in possession of fake gold bars, heavy metal boxes stuffed with bags of cement and mallet hammers, and Ghana custom stickers.

It is said that immediately the Sounthorn reported the matter to detectives, Adhiambo went into hiding prompting a warrant for her arrest to be issued, in May 2019 after a request by the state. 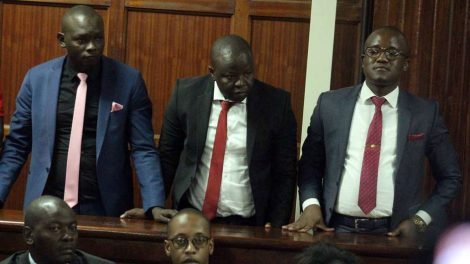 It is alleged that by means of fraudulent tricks and displaying heavy metal boxes allegedly parked with genuine gold bars and having and office trading in as Nirone Safe Keeping limited, they falsely pretended that they were carrying out a genuine gold business.

Intelligent sources close to the investigations say the cartel has been colluding with a number of Members of Parliament, rogue police officers, the judiciary, immigration staff from JKIA and some bankers to defraud foreigners and unsuspecting clients millions of shillings.

Director of Criminal Investigations (DCI) George Kinoti said they have solid leads on suspects involved in the fake gold racket in Kilimani; some of whom are influential politicians, businessmen, lawyers and judicial officers.

Bungoma Senator Moses Wetangula, was to be summoned to shed light on a leaked audio recording that implicates him in the fake gold scam.

In the Sh300M fake gold scam, it was a well crafted work that included lawyers who drafted the deal with intentions of circumventing the system and going through it all undetected.

According to documents seen, Otieno to hide his traces, wasn’t to be involved directly in this deal coined as a loan transaction and instead an alleged loan from the said Lao Republic national Southorn Chanthavong was drawn to one Rose Adhiambo Omamo, facilitated by a Nairobi Lawyer, Tom Okundi Ngoe(Ayieko) of Okundi & Company Advocates.

The first loan of Ksh100 million was advanced by Sounthorn Chanthavong, on behalf of Simuong Group on February 8, 2019 to Ms Adhiambo. Acknowledgement notes in our possession show that the loan was released in cash, for unstated reasons.

Related Content:  Scam: Of Jimmy Gait And The Fraud That Is India’s BLK Hospital

In the second instance, on February 28, 2019, Ms Adhiambo received Ksh200 million from the same ‘lender’. Suspiciously, the money was also released in cash and involved the same parties.

According to a letter dated February 26 from Chanthavong, it dictated that the lawyer release the amount (Ksh200 million) to Ms Adhiambo “in cash, immediately”.

Amazingly, the amount was to be repaid in one month at an interest rate of five percent per month, meaning she would have had to repay approximately Ksh210 million. The loan agreement documents in our possession show that she got the loan since she was an “established property developer.”

However, this raises the question why a property developer would borrow such an amount for one month, since no property could be developed within such time frame in the Kenyan environment.

However,the magistrate ordered Adhiambo to be released on a cash bail of Sh 300,000 or a bond of Sh 1.5 million.